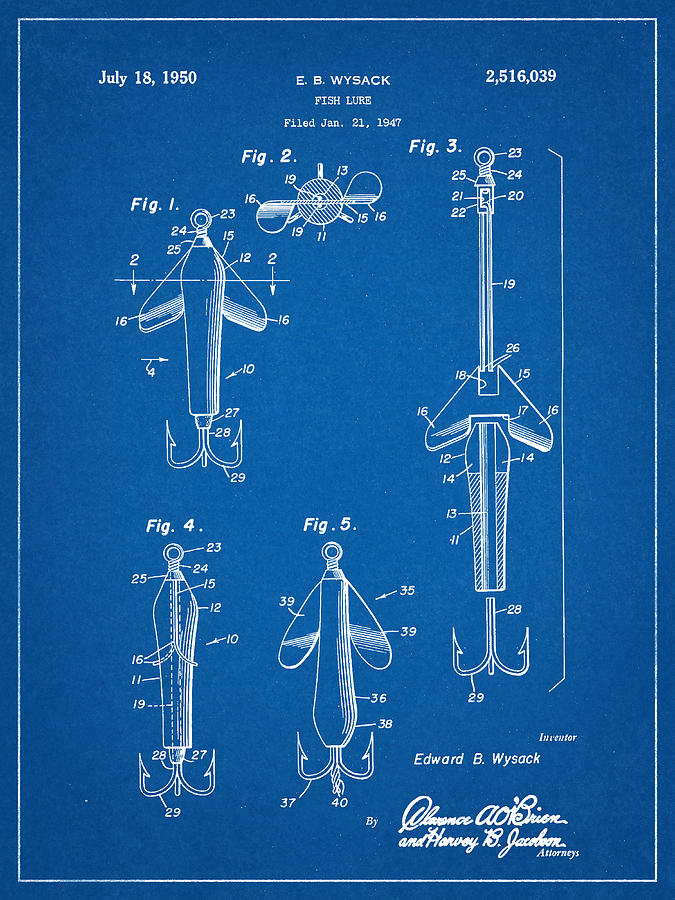 When I was a boy, around five years old, I got my first job in my Dad's McGinty shop that he ran out of our family garage. My job was to remove painted McGinty wood bodies (parts 10 and 36 shown in Figures 4 and 5 in the patent drawing shown here) from nails in a board and replace them with unpainted bodies. Once full, the board went e sent to the paint booth. It was a fun job for a kid, and I felt important. My Dad would then put the rest of the fish lure together, as shown in the patent drawing, and take boxes of them to sell to local sporting goods stores, hardware stores, and bait shops. The local fisherman loved the McGintys. But I still think my Dad caught more walleye from the Detroit River than any of them. I have very fond memories of those 'good ole days.'
It was fun for me to use some Photoshop effects in this patent drawing. The drawing shown incorporates a blueprint effect.
It's also kind of fun to read about how the lure works. The words below are a condensed version of the descriptive text filed with the patent application:
This invention relates to new and useful improvements and structural refinements in fish lures. The principal object of the invention is to provide a device of the character herein described, which realistically simulates the appearance of live bait and which exhibits life-like movement when placed in use.
A further object of the invention is to provide a fish lure which is simple in construction and which may be readily attached to or detached to the fishing line.
Another object of the invention is to provide a rugged fish lure that will readily lend itself to economical manufacture.
With the above more important objects in view and such other purposes as may become apparent as this specification proceeds, the invention consists primarily of the construction and arrangement of parts as shown in the accompanying drawings in which:
Figure 1 is a side elevation of the device;
Figure 2 is a cross-sectional view, taken substantially in the plane of 2-2 in Figure 1;
Figure 3 is an exploded view showing the construction of the device shown in Figure 1;
Figure 4 is an elevational view taken in the direction of arrow 4 in Figure 1;
Figure 5 is an elevational view showing a modified embodiment of the invention.
When using the invention, the eye (23) is attached to the fishing line. When drawn through the water, the screw-like configuration of the blades (16) will impart a rotary motion to the lure. The provision of the coupling (22) and the swivel attachment of the hook (23) will, of course, prevent the fishing line from twisting during the rotation of the lure.