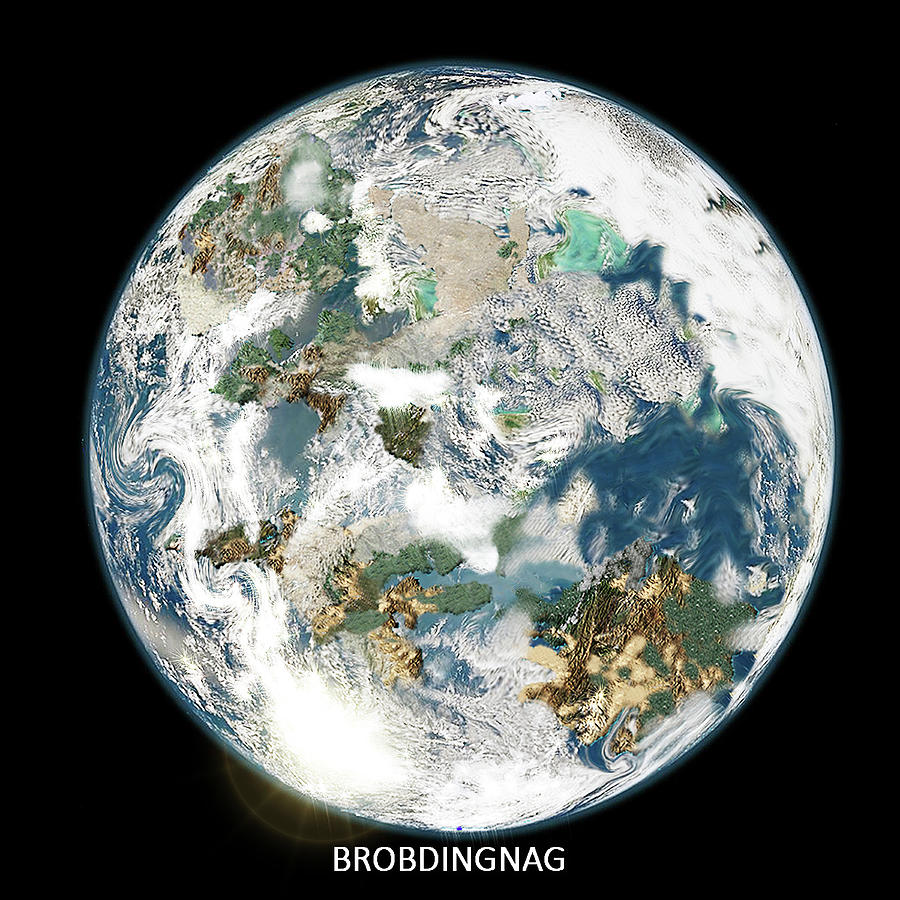 Brobdingnag, the fourth planet of the 54 Chi Orion star system, lies approximately 32.3 lightyears from Earth. The planet diameter measures four percent larger than Earth's, and at its surface, gravity pulls with 1.07 times the force of Earth's. No moons orbit the planet, and no nearby stellar objects of unusual prominence distinguish its sky. Its sun, the star 54 Chi Orion, a yellow main-sequence star, is just slightly larger, slightly hotter, and somewhat younger than Earth's own.

Landmasses cover just 19 percent of Brobdingnag's surface, so the planet contains 29 percent less dry land than Earth, despite its larger size. Five oceans divide the land into eight major continents and numerous islands. All the continents cover less area than Earth's Asia or Africa, and unlike Earth's continents, all lie almost entirely within the planet's temperate zones. Seven continents fall into three distinct groups, each group being widely separated from the others by water. The eighth continent, Tyndarus, sits in relative isolation. This geographic fact has caused distinct evolutionary patterns within the four regions. Brobdingnag's axial inclination to its ecliptic plane of 15° makes its seasonal temperature variations less extreme than Earth's. The planet rotates on its axis once every 14 hours, but its year stretches four Earth days longer than an Earth year. The short day reduces the extremes of daily temperature and keeps the noonday heat over most of the planet from being intolerable.

Brobdingnag's climate is considerably warmer than Earth's. Mean temperatures consistently measure eleven degrees higher than Earth's at comparable latitudes and elevations, and no permanent ice packs cap the planet's poles. Fortunately, little of Brobdingnag's land lies within its tropic zone, since these regions are too hot for continuous Human habitation. The planet's atmospheric pressure at sea level lifts the barometer about 15 percent higher than on Earth, causing higher wind pressure levels at the same velocity. High humidity and daily rains characterize the planet's weather over most of its surface, except for sections of northern Tyndarus and the Great Golan Desert.

Settlers co-exist with large animals resembling Earth's dinosaurs and pterosaurs. Life with these magnificent creatures is not without risks, but the excitement of seeing and interacting with them is irresistible to some people. If you ever yearned for a season pass to Jurassic Park, this may be the planet for you.

Exoplanet Brobdingnag is the third of eight planets available for emigration by all earth citizens as initially depicted in the book "Handbook for Space Pioneers" by L. Stephen Wolfe and Roy L. Wysack.